If you want a good example of how we can help you make a hit game, look no further than Tippy Toe. One of the most popular hypercasual games in the US by the end of 2021, it accrued 15 million users in just three months and became one of the most financially successful apps in TapNation history1. So, without further ado, here’s a breakdown of how Tippy Toe got to the top.

An intro to Tippy Toe

Tippy Toe is a hypercasual game in which the player has to step on a variety of weird and wonderful objects, including hamburgers, cakes and toothpaste. Squishing an object earns points and generates super-satisfying ASMR sound effects. Along the way, the player can access bonus levels, earn money to customise their character and travel to different locations around the world.

The main inspiration for Tippy Toe came from ‘Wheel Smash’, another ASMR-based game in which players tread on various objects with a giant tyre. Where Tippy Toe differs is the intuitive and satisfying control system — players have to hold down an area of the screen to raise their character’s leg, then release to make the character stomp down on an object. Combined with sound effects, the ‘hold and release’ control system makes for highly enjoyable gameplay. 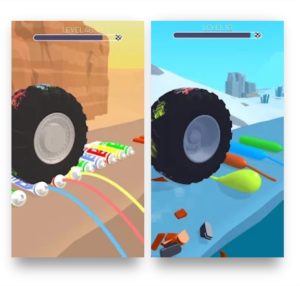 At launch, Tippy Toe had a D1 retention of over 40% and featured in the top 70 hypercasual games in the US. Not bad, right? 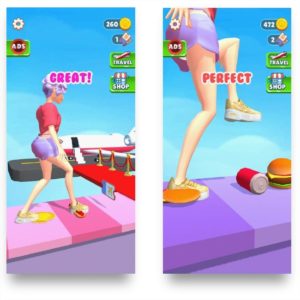 Tippy Toe started to chart in places like Russia, Turkey, Egypt and the UK. This gave us the idea of introducing a variety of settings to the game. Players could now squish objects in New York, Paris, Dubai and all kinds of other locales. Sure enough, the change improved the game’s performance metrics! 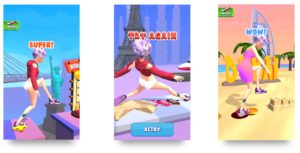 We also picked up on social trends and incorporated them into the game as objects, giving Tippy Toe more of a contemporary feel and attracting even more players. In this specific case, “pop it” toys were extremely popular at the release of the game, which is why we ended up integrating them among the other items, and the metrics suddenly started to rise again. It’s a good example of how something in the wider culture can influence a game for the better. 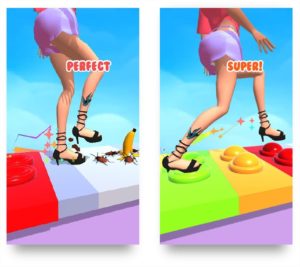 At launch, Tippy Toe suffered from low rewarded impressions per user and an unbalanced in-game economy. It also had no bonus levels. So, during two months of iteration we made some key changes to maximise monetisation:

These new features boosted LTV (lifetime value) by no less than 80%, which showcases the importance of keeping the ideation and iterations going even after the release.

The results speak for themselves

After launch, Tippy Toe enjoyed a meteoric rise to success. The results speak for themselves:

Your game won’t always be a huge success right at launch, but with enough work, follow-up and iterations, you can always make it rise to the top.

If you have any further questions about Tippy Toe or any of our other games, feel free to email us or get in touch via our social channels!

Why you should take UA into consideration when building a prototype