A/B testing is a crucial part of our production process at TapNation. This is what takes your KPIs to the next level and makes your game truly ready for a global launch.

What’s more, we’re very proud of our rigorous standards when it comes to A/B testing. And, with over 500 million downloads as of March 2022, we like to think it’s a process that works.

So, to give you a flavour of how we can help, here’s a rough guide to A/B testing at TapNation.

What is A/B testing and why do we do it?

A/B testing means carrying out an experiment on two versions of your game— an ‘A’ variant and a ‘B’ variant.

It’s important that we run A/B tests on slightly different versions of your game so we can understand which elements are generating revenue and which aren’t. This way, we can make changes before launch and give your game the best possible chance of becoming a hit.

Generally, A/B tests only lead to small tweaks. The core gameplay is set, and we’ll instead be focusing on things like user interface, colours, in-game advertising and other ways to maximise the LTV or ‘lifetime value’ of your game. LTV is the average revenue that a customer of your game will generate throughout their lifespan as a customer.

As we mentioned earlier, the aim of A/B testing is to maximise the LTV or ‘lifetime value’ of your game. Within gameplay, there are lots of different ways to do this:

And the list goes on. The possibilities are plentiful, the only thing to keep in mind being to serve the LTV with these new changes, which again means testing every idea on its own.

You can also boost LTV through testing ad monetisation techniques. These are different methods of monetising your game through advertising revenue. Here’s a few ways we might do this:

In-game advertising is probably the best monetisation model available to hypercasual games. For this reason, it’s one of the most important things we’ll A/B test during our process. It’s worth quickly exploring what kinds of in-game ads your game could include:

They can all benefit your game in different ways, A/B testing will help you understand which one is better in which cases.

As part of our A/B tests, we always give access to our own testing platform to our studios, giving you genuine transparency across our process. We also offer remote setup for A/B tests and live access to a wide range of useful testing metrics, helping you become part of the process and understand exactly what’s working and what isn’t. 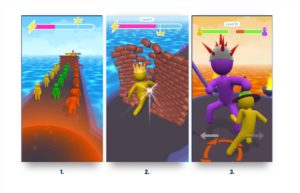 To get a better idea of how our A/B testing process can make a positive impact on your game, look no further than Giant Rush, one of our biggest hits to date.

In Giant Rush, you navigate a giant through a series of obstacle courses, with bonus levels and boss fights along the way. By making subtle tweaks to the game, we managed to make significant improvements to the game’s retention:

Giant Rush now boasts roughly 125 million downloads and generated roughly $12 million in revenue during its first 6 months. Through our A/B testing process, we also managed to boost LTV up to 100% in 30 days, which is yet another proof of the incredibly huge positive it can bring to your game.

If you have any further questions about our A/B testing process, feel free to email us or get in touch via our social channels!