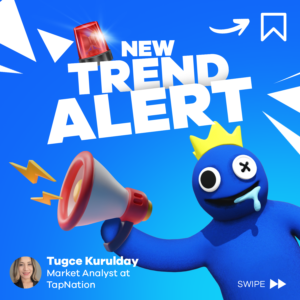 It was around the end of August when a game suddenly started to climb the US top charts: 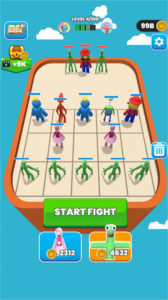 It was using the popular theme of “Merging Games”, where you merge to evolve, improve your fighting skills and defeat your enemy, featuring very colorful and cartoonish characters.

Shortly afterwards, many other games followed the same path to the top charts featuring the exact same characters, giving a hint of a potential new trend for hyper-casual. So let’s go back and talk about the origin of this most recent trend. 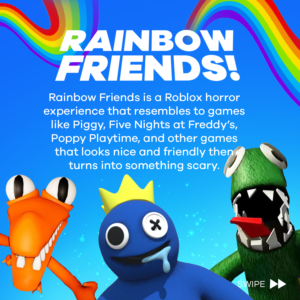 Considering the worldwide success and virality of these games, it seemed like a working formula for the market.

In Rainbow Friends, you play as a child who has been kidnapped during a school trip to an amusement park called ‘Odd World’. From the moment of your capture, you must survive five nights in a strange location that’s entirely empty. Each of these nights consists of different tasks and challenges you should complete while you avoid the four colorful monsters who have different skills. Friendly reminder: be ready for jump scares while you try to escape…

The most popular and common character in the game. Similar to Huggy Wuggy or Cookie Monster but instead with a crown on it’s head, a drooling mouth and a button in one of its eyes.

With 4 fingers and 4 toes and a weird posture, purple rainbow friends lurk in the vents in an attempt to catch you.

The Red Rainbow Friend is currently the narrator and mysterious character that talks to you throughout your experience in Chapter 1 of the game. The most remarkable feature is the big unique eyes and the white suit.

Orange rainbow friend looks like a lizard with a big mouth with a full set of teeth, known for moving fast. 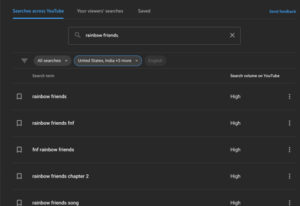 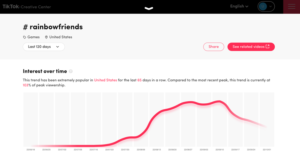 When publishers and studios realized the potential of the trend, Rainbow Friend games started to pop up in both stores.

This strategy is nothing new though, as it is a common trick among publishers and studios to use social trends to improve game metrics. Not so long ago, the same phenomenon happened with previously mentioned trends such as Five Night at Freddy’s, Poppy Playtime, Netflix’s series Squid Game and many more.

How Rainbow Friends Fit Into Hyper-Casual 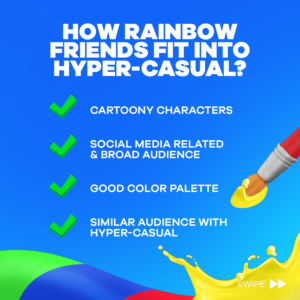 Rainbow Friends features cartoonish characters. The similar kind of 3D models you can find in hypercasual games, which are filled with simplistic and rounded assets. In the same approach, both are very colorful universes matching each other perfectly.

Moreover, hypercasual games target a huge worldwide audience as every smartphone owner is a potential player, which means they need to feature very broad themes that can appeal to everybody. This is exactly what Rainbow Friends brings to the table, a worldwide trend that anyone can understand and appreciate.

In addition, it has been all over on social networks, which is another good reason for the hypercasual studios and publishers to integrate it into their games, as chances of reaching a broader audience are multiplied, hence the improvement of the metrics.

Beyond a shadow of a doubt, Rainbow Friends is the latest trend in the market, ticking many boxes for hypercasual. Important questions are remaining unanswered though: how far will this trend go? Will Rainbow Friends Chapter 2 come out? Will the trend die fast, or will it become a must-have asset for both game studios & publishers?